Ever since moving to Ohio my boys haven't gone to bed well.  They've gotten up for any and every thing.  They destroy all of their folded laundry which I really can't stand -and do other mean and unnecessary things to torment their poor mama.  All while smiling, giggling, and genuinely enjoying themselves.
Finally, I decided gee, people use charts.  Why don't I use one?  This actually resulted when in a moment of desperation I promised them if they would just please, please stay in bed and not get up, turn on the light, etc I would get them a surprise for the morning.  Well, they responded great and didn't get up!  So I had to think of something.  I knew I shouldn't give them a super big prize or anything since this behavior should continue.  Right? Right.
Anyway, here is the chart:
(The chart was the surprise the first morning with another prize(toy) after 10 smiley's were earned). 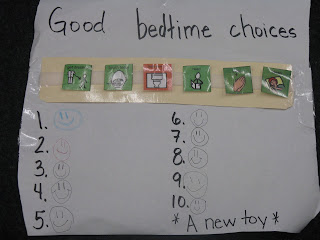 The pictures represent: get dressed, brush teeth, bathroom, read scripture, pray, and STAY in bed.  They are on Velcro so I can take them off and change the order or just let them hold them or put them on themselves if they need a reminder of what they are supposed to be doing. 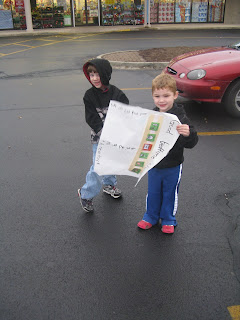 The new toy???  ANYTHING from the Dollar Tree.  Yes, we took the chart.  This was to be a BIG deal, they needed to know why and how they earned this great opportunity.  So even though cold and windy, we took a picture! 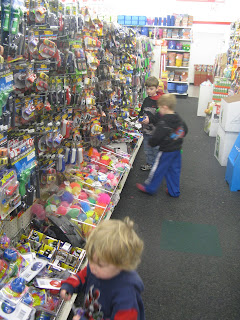 Don't think that's cool enough?  Think again.  These boys were in heaven.  They counted down the days and worked super hard.  It took about two weeks to earn the ten smiley's.  We are now working on numbers 11-20 and then they will get another trip to the dollar store.  When we get to 30 the chart will be full and I'm considering a big splurge like Chuckie Cheese!  What did they choose?  Ammon: race cars package of six.  Orlando: a four wheeler car and Ivan was a bit more creative: He chose a wand.  Like a twirling wand.  Except he called it a dragon sword and was off to fight dragons with it.  It blinks on both ends.  Exciting indeed, and the smiley's on my face are now also adding up!
Posted by Unknown at 9:19 PM

What a fantastic idea! They are learning at a young age what the results of good choices are. I saw your comment to Sister Paulsen about a 10-year reunion. I LOVE the idea!!! I will be there! Let me know if it gets rolling, and what I can do to help. Te amo!